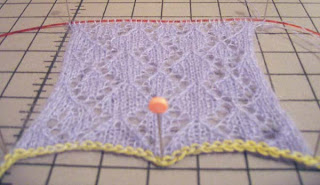 I definitely needed to rip my diamond lace scarf – one, because I made a bunch of mistakes and was having a hard time tinking the Rowan Kidsilk Haze and two, I was just bored with this pattern. It was not rockin’ my world and I learned what I needed to learn.

Plus, I found another pattern I liked so much more (the dangers of Ravelry!) that only required a mere skein of Rowan Kidsilk Haze (although I have a tad less than a skein but enough I think). I’ve started Wisp by Cheryl Niamath of the Fetching Mitts fame. 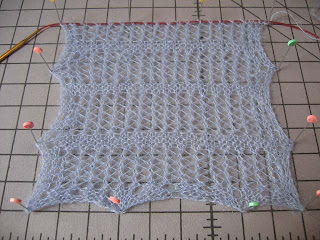 Because I only have a little less than a skein, I’ve made mine a bit smaller, casting on only 38 stitches instead of 46 and using size 6 needles instead of 7. So far, this is a great summer/brain-dead knit – lightweight and super easy to knit.

Want to join the discussion?
Feel free to contribute!